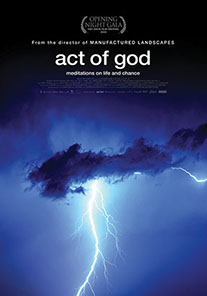 ACT OF GOD
‍
ACT OF GOD is a feature documentary about the metaphysical effects of being struck by lightning.

The event represents the paradox of being singled out by randomness, and so precipitates questions about chance, fate and meaning in life. The film explores seven stories from around the world that raise and respond to these questions, while keeping the sky and what comes out of it as a central visual metaphor and thread. Paul Auster, who was struck as a teenager, philosophically anchors the film, along with Fred Frith, the improviser, who both imaginatively underpins it and personally demonstrates the ubiquity of electricity in our bodies and the universe. James O’ Reilly goes back for the first time to the farm in northern Ontario where he was struck and his friend was killed 28 years ago, and relives the event he was only partially able to exorcise by writing a play about it, also called Act of God. France’s best known stormchaser, Alex Hermant, takes us on a tour of his museum in Marcenat, describing what drew him to lightning and also how he lost his soul by photographing it.

Dannion Brinkley, self-described bully and CIA assassin, had a near death experience after being struck which took him to celestial cites and changed him radically: from someone who blew up farmers in Nicaragua to someone who heads the largest association of hospice volunteers in the U.S. During the festival of Santa Cruz, in a small, deeply Catholic town in central Mexico, five children praying around a cross on top of a mountain were struck by lightning and killed. A year after this unspeakable tragedy, a vigil is held for the children in a newly built chapel at the site of the strike. Josue’s mother, Salome, believes God took him to be an angel. Deysey’s mother, Maria, is not so sure. Yet resolute certainty is demonstrated by the Yoruba community in Palmira, Cuba, who conduct complex rituals and make offerings to the god of lightning, Shango [a.k.a. Santa Barbara], to ensure that he will not get angry and send lightning bolts to earth, “because lightning can kill us, as simple as that."
"Visually ravishing." ★★★★ – Eye Magazine
“Lightning Strikes Again.” ★★★★ – Now Magazine
"A highly entertaining dash through the landscape
of human meaning." ★★★★ – Vancouver Sun
"Act of God hits the mark." – The Globe and Mail
"Riveting." ★★★★ – Time Out London
Opening Night Gala Hot Docs Film Festival 2009
‍Official Selection Karlovy-vary Film Festival 2009
‍Official Selection Silverdocs Film Festival 2009