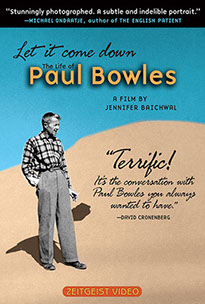 LET IT COME DOWN: THE LIFE OF PAUL BOWLES
‍
Paul Bowles, who lived in Tangier, Morocco and died there in 1999 at the age of 88, was the quintessential iconoclast. He left the United States for good in the 1940s after building an illustrious career as a composer, rejected the heroic identity requisite to expatriate American writers and buried himself in the culture of North Africa. A writer's writer, his associations span the elite cultural circles of this century. At twenty, he was an intimate of Gertrude Stein and Aaron Copeland; at thirty the peer of Tennessee Williams, Truman Capote and Gore Vidal; at forty, literary godfather to Beat writers William Burroughs and Allen Ginsberg. His unorthodox marriage to writer Jane Bowles - both were gay and had significant relationships with others throughout their marriage - is legendary. Together they formed the magnet which drew an extraordinary group of writers and artists to the exotic freedoms of Morocco before independence.

In this definitive film biography, the notoriously laconic and reclusive Bowles finally speaks out on the subjects he has remained silent about over the years. Lying in bed at his home in Tangier and smoking kif with an elegant black cigarette holder, he reflects on his life, his work, Jane, love and his friends with unprecedented candour. His tone is almost omniscient, as though he is surveying both life and death from some lofty interim vantage point. The film is built around this self-revealing monologue, with various voices breaking in to comment, dispute and clarify. Chief among these is William Burroughs, who acts as a sort of commentator on Bowles’ version of his life.

Director Jennifer Baichwal's association with Bowles dates back to her early twenties when she ran away to Morocco, drawn by his dark, sinister prose. Subsequent visits deepened their friendship, culminating in the interview which is the basis of the film. Breathtaking footage of Morocco, from the twisted medinas of Tangier and Fez to the hypnotic beauty of the desert, becomes a metaphor for Bowles' interior world. Diverse archival material evokes the atmosphere of North Africa in the '30s and '40s. The film includes interviews with Bowles' late friends William Burroughs, Allen Ginsberg and David Herbert, as well as analysis - some of it harsh - from Moroccan writer Mohammed Choukri. There are compelling scenes of Bowles translating storyteller Mohammed Mrabet from Dharisian into English, exclusive footage of the last meeting of Bowles, Ginsberg and Burroughs in New York and unprecedented footage of Jane Bowles’ lover Cherifa, who is rumoured to have poisoned Jane to death. Filling this out are readings from celebrated Canadian actor Tom McCamus and detailed treatment of Bowles’ work as a composer.
Winner Best Arts Documentary, International Emmys 1999
Nominee Best Feature Documentary, Genies 1999
Winner Best Biography, Hot Docs 1999
Nominee Best History and Biography Program, Banff Rockies 1999
A definitive film biography
– to the extent that such a thing is possible
– on that elusive and iconoclastic legend,
Paul Bowles

It's terrific...like a Francis Bacon painting.
It's the conversation with Paul Bowles
you always wanted to have.
David Cronenberg

A rare documentary, stunningly photographed,
that is a subtleand indelible portrait
of that complex literary figure – Paul Bowles.
Michael Ondaatje