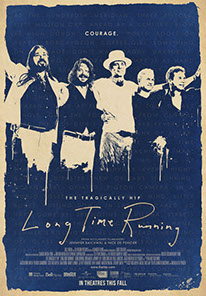 The film begins at the press conference announcing Downie’s illness, and we learn from doctors James Perry and D.J. Cook about his diagnosis and prognosis, neither of which remotely suggest the possibility of an ambitious arena tour for Canada’s most popular band. Downie’s memory is severely compromised from brain surgery, and the ongoing chemotherapy and radiation treatments are exhausting and debilitating. Through interviews with Downie, his brother Patrick, bandmates Paul Langlois, Rob Baker, Johnnie Fay and Gord Sinclair, as well as managers and key crew, we follow the improbable, courageous and inspiring journey of a tour which happened through sheer force of will, determination and grace, too – along with the deep mutual dedication between the band and their fans. The tour sells out in minutes as the nation prepares for a rock and roll reckoning for the ages.

Blending interviews, verite, intimate behind-the-scenes moments, abstraction, fan testimonials, audience experience and performance footage, we chart the path from the first tenuous rehearsal in Toronto to the triumphant rendition of Ahead By A Century in Kingston, watched by 11.7 million Canadians, the second largest broadcast audience in Canadian history. We go across the country, from Heriot Bay to Gros Morne to Moosonee to explore this shared national experience. The band and the “tour family” of technicians and managers reflect on their long careers as they cross country like they have so many times before, with the poignancy of the probable finality of this trip threatening to well up and overtake the moment. And the fans reflect on what this band and their music means to them.

Music is how we express the part of us that is difficult to articulate – the place deep inside us where identity and soul reside. For a generation, the Hip, more than any other band in this country, have given us a kind of national soundtrack; we have taken their music and woven it into what it means to be Canadian. With their mix of unpretentious grit and heartbreakingly beautiful poetic turns, they have mapped a historical, geographic and emotional landscape with unexpected candour and intimacy. The 2016 Man Machine Poem tour provided a collective moment for all of us to celebrate, appreciate, mourn and reflect. LONG TIME RUNNING attempts to capture that moment in all its complexity and freeze it in time.
Winner Allan King Award for Excellence in Documentary 2018 [DGC Awards]
Nominee People’s Choice Award, Toronto International Film Festival 2017
Nominee Best Editing in a Feature Documentary: Roland Schlimme, Canadian Screen Awards 2018
First Runner Up TIFF The Grosch People's Choice Documentary Award 2017