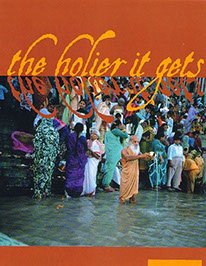 THE HOLIER IT GETS
‍
THE HOLIER IT GETS is a film about family, dueling cultures, death and a river. It tells the story of a journey, which takes an unexpected turn, that four siblings make into the Indian Himalayas. The purpose of their trip is to strew the ashes of their deceased father at the source of the Ganges river.