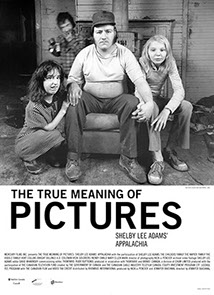 
‍
THE TRUE MEANING OF PICTURES is a feature-length documentary which addresses the issue of representation in documentary photography by examining the work of American photographer Shelby Lee Adams.

More specifically, the film seeks to [i] spend time with the subjects of Adams' work, in order to get to know them better and [ii] address the controversy and response Adams' photographs generate, which involves the politics of representation. Both strands of the film will combine to explore the larger - and also self-reflexive - issue of whether it is possible to "document" a community. The emotional intention is to compel viewers to move beyond voyeurism into empathy, so that by the end of the film they will feel authentically connected to people with whom they assume they have nothing in common.

DESCRIPTION
Shelby Lee Adams takes photographs of Appalachian "mountain people." He is extremely rare, if not unique, among documentary photographers because he works with only one community, and has been doing so for over thirty years. Adams was born and raised in Kentucky, although he was and is of a different class than his subjects.

Adams' subjects almost unanimously support his work, and assent to it to such an extent that he has been able to continue his photography for three decades. Yet his work generates extreme levels of controversy, both in Kentucky and outside it. Appalachian people have been caricatured by mainstream America for generations [some cultural artifacts of this: Deliverance, Li'l Abner, The Dukes of Hazzard and The Beverly Hillbillies]. Adams is accused of perpetuating these stereotypes in his photographs, as well as of exploiting his subjects, using various questionable techniques [lighting, flash, wide-angle lenses] to distort and theatricalize them and of presenting his work as documentary when it is not.

Adams claims that he is showing things as they really are and that his work is a form of self portrait, and does not see any contradiction in asserting both simultaneously. He argues that people in America are ashamed of the fact that there are people living in abject poverty in a state which is rich in natural resources but has been stripped of them by speculators who through various corrupt practices made a great deal of money but gave nothing back to the community. Many of his subjects live without electricity or running water, in environments which have been devastated by coal mining practices, strip mining foremost among them. He claims that the new middle class of Kentucky are ashamed of this heritage of poverty and express their shame by denying its existence.

Adams also claims that his work is a form of exploring his own psyche and his own past growing up in the mountains. He says that his best pictures are a combination of this self-exploration and an authentic document of the people he photographs.

This feature-length film seeks to explore problems of representation by examining Adams' photographs and getting to know the people behind them. There are various eminent critics and photographers  who discuss and argue about his work, debating the issues and analyzing specific photographs. Intercut with this are the stories of a number of Adams' most significant subjects. There's the Napier family from Beehive who lost ten children to violent deaths and live without running water, heat, plumbing or electricity. There are the followers of the Holiness religion who drink strychnine and handle rattlesnakes to prove their faith in God. There's the Childers family, who have struggled for years to keep three developmentally challenged kids at home.

It is a truism that when you get to know someone, it is much more difficult to objectify or caricature them. The film spends time with a number of subjects in order to try to expand the experience of viewing their photographs.
Winner Best Arts Documentary Program, Geminis 2003
Nominee Best Direction in a Documentary Program, Geminis 2003
Exploring the politics of representation in the controversial photographs of Shelby Lee Adams.
‍
"Without passing judgement, [Baichwal] develops an extraordinary perspective, both moral and aesthetic."
Brian D. Johnson, Macleans magazine

"Baichwal give us a provocative look at the way
meaning is created in the mind of the viewer."
John Harkness, NOW magazine

"Unlike most bio-documentaries, Baichwal explores
her subject with integrity, guts and a critical eye."
Take One, Film & Television in Canada