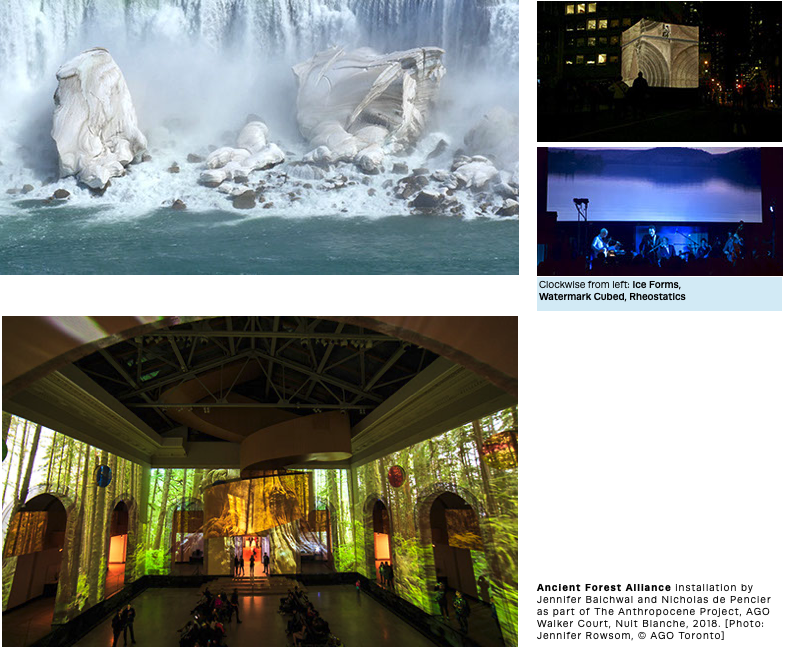 VIDEO INSTALLATION
INFO+
Ancient Forest Alliance 2018 / 10m | 4-channel immersive HD
As part of Nuit Blanche 2018 at the Art Gallery of Ontario, Jennifer Baichwal and Nicholas de Pencier's film installation, Ancient Forest Alliance, creates a unique opportunity for visitors to witness both old-growth forest and deforestation on Vancouver  Island.
The installation, projected onto the walls of the AGO’s Walker Court, invites viewers to take a closer look at pristine environments and contemplate our impact on them.

Ice Forms 2016 / 5m 29s
Ice Forms is a high-definition video loop of massive residual ice at the foot of the American Falls, Niagara. It was commissioned by Andrew Hunter as the last room of the Lawren Harris: The Idea of North exhibition at The Art Gallery of Ontario, where it remains in their collection. It was remounted in 2018 at the Art Gallery of Hamilton as part of the Water Works exhibition.

Tragically Hip: Fully Completely 20th Anniversary Tour 2015
Mercury Films created the video projection backdrops as part of the Tragically Hip’s 2015 Fully Completely 20th Anniversary tour.
‍
Rheostatics: Music Inspired by the Group of 7 2015 / 90 mins
Jennifer Baichwal and Nicholas de Pencier collaborated with their longtime friends in the Rheostatics for a four day music and video installation commissioned by the Art Gallery of Ontario for the Walker Court space. The band reprised their suite of songs called Music Inspired by the Group of 7 and Baichwal and de Pencier transformed the space with live video mixing of images and video evocative of the canonic Canadian artists.

Watermark Cubed [Nuit Blanche] 2013 / all night long
As a commission of Nuit Blanche, a twenty foot high cube erected in the intersection of Bay and Richmond streets in Toronto’s financial district became the canvas for live video mixing of images from the Watermark project. A collaboration with Brian T. Moore, who did the mixing → here
© Mercury Films Inc. 2023